Tips for Transitioning to Minimal or Barefoot Running 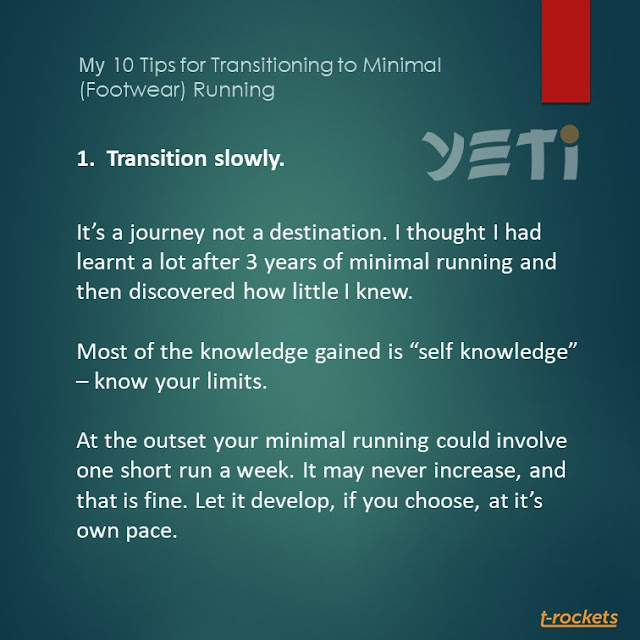 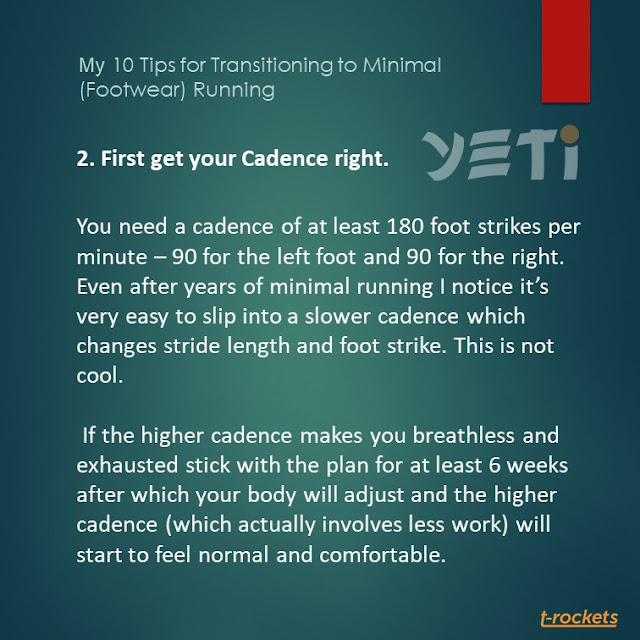 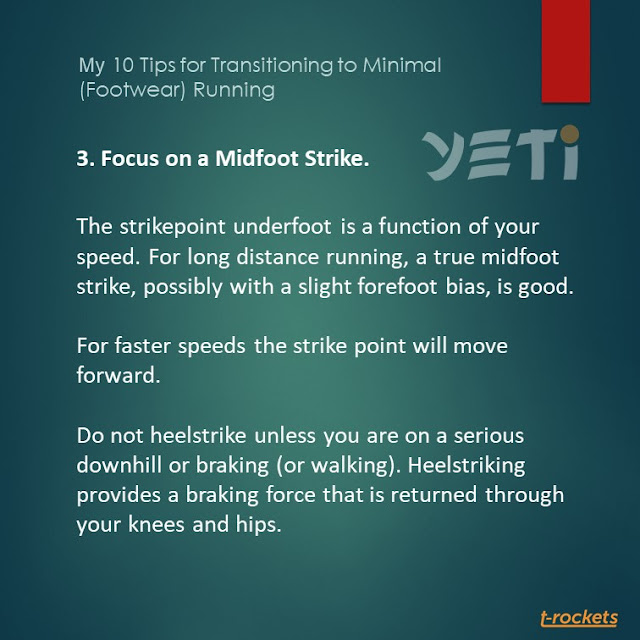 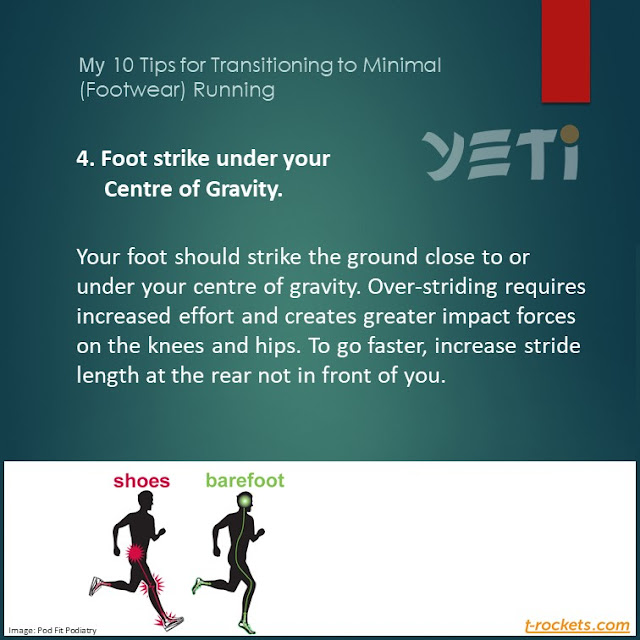 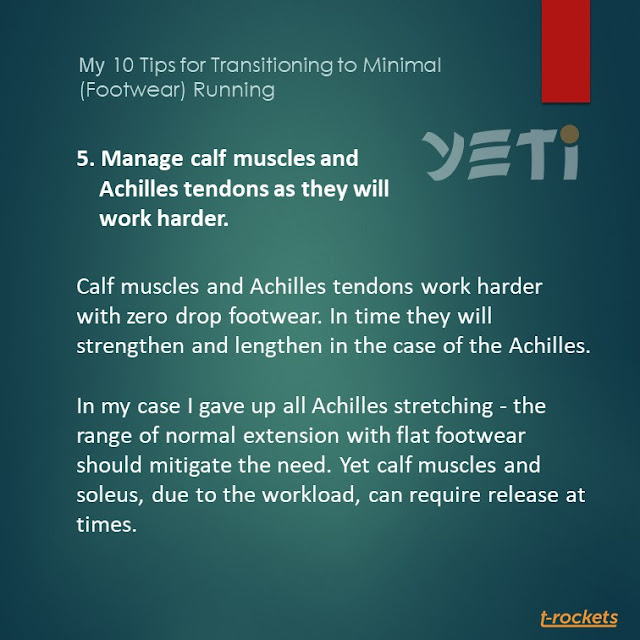 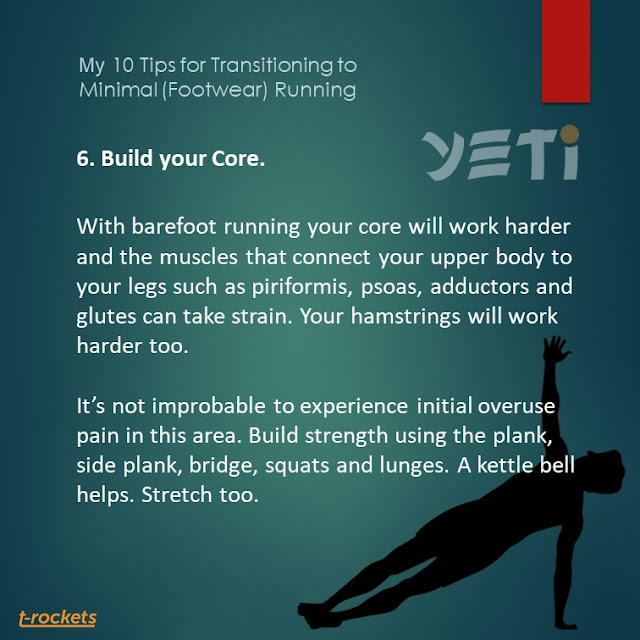 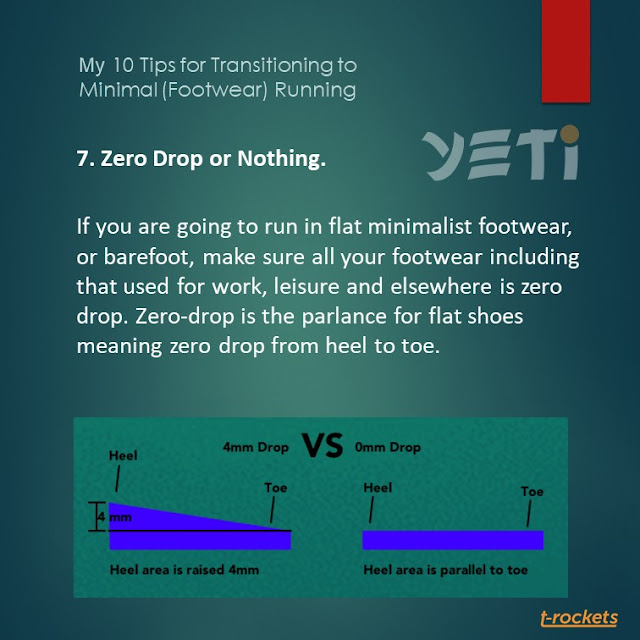 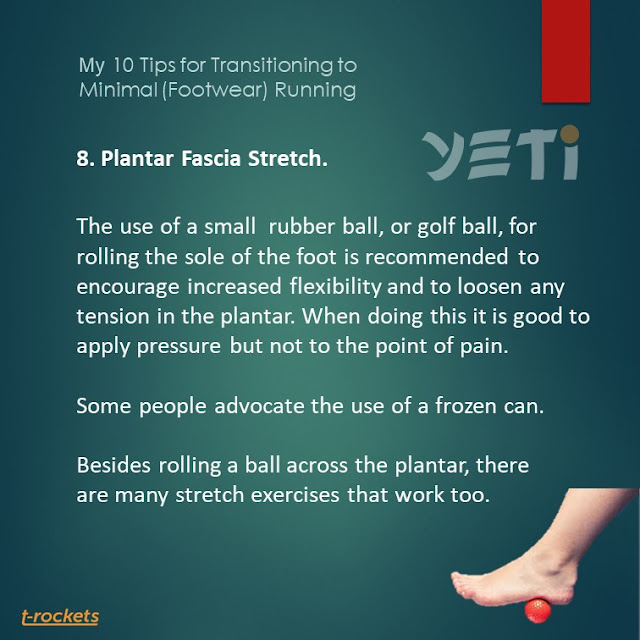 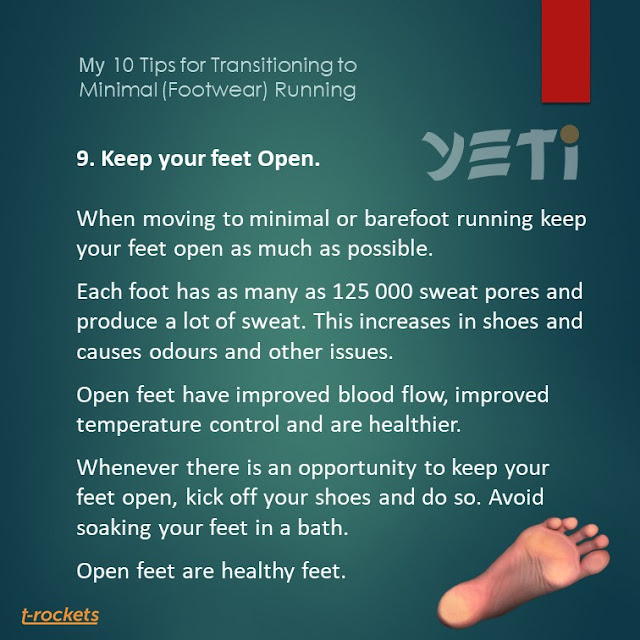 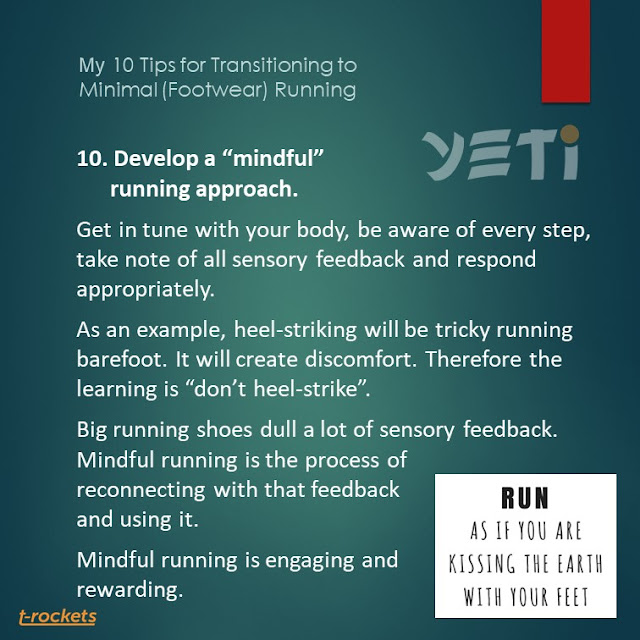 Like a dog with a Pavlovian response I’d come to expect the aroma as I crested the rise. The climb up the hill away from the small harbour of Hanga Roa had me breathing hard, but it was that pleasant warmed up feeling of physical exertion one gets when you hit your stride. The sweet smelling fragrance of freshly baked bread washed over me. I slowed down to savor the moment inhaling deeply as I did so. 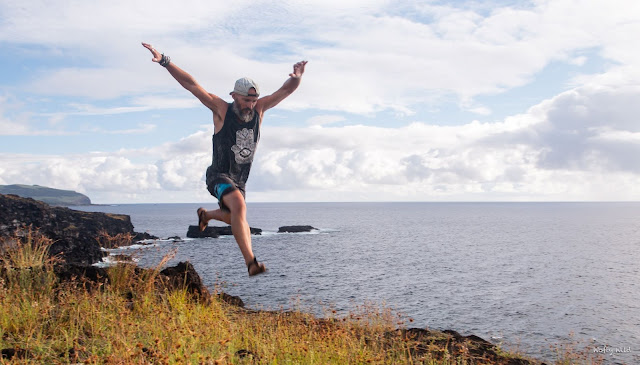 Around me the residents of Rapa Nui were rising in the dawn. Trucks, workers, coffee and cigarettes, the hallmarks of blue collar workers world-wide starting their day was no different on Easter Island. The men on Rapa Nui have fantastically long hair, which is either worn in dreadlocks, braids or tied up with colorful bandanas. This combined with an obviously passionate interest in tattoo art gives the dawn work gangs a pirate and outlaw appearance. 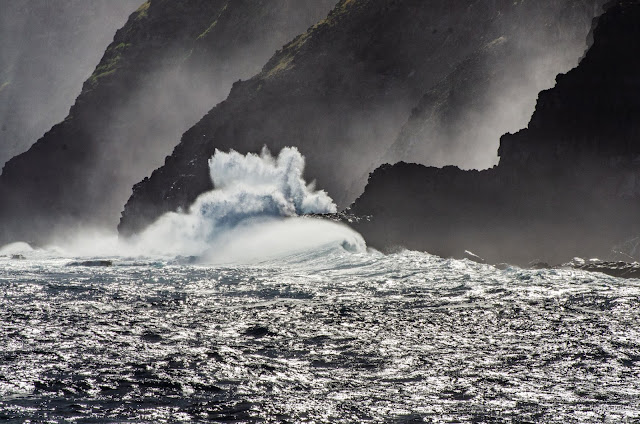 From my edge of the village I now have many options to explore the island on foot. To the North directly ahead is Maunga Terevaka. I know it well having run through a tropical rainstorm and over many false summits the day before to claim the highest peak on the island. Half way up and in the identical place on the way down the local Manu Toke Toke hawk, cries out, a lone sentry to my ramblings in the wilderness. From there you can look over the entire island.

To the south is the volcanic crater of Ranu Kau, home to Orongo the sacred village of the Bird Man Ceremony or Kavi-Kavi as the locals call it and the final resting place of the first king of Rapa Nui, Hotu Matua. To the southeast is the distinct shape of Ranu Raraku, the birthplace of the mystical and Megalithic Moai, which have become synonymous with Rapa Nui worldwide. Beyond that is Tangariki, perhaps the most well-known of all the Ahu’s, a place where fifteen giant Moai stand lined up watching over an ancient village which is now long gone.

The sentries remain, quiet and impressive monuments to what must have been an extraordinary devotion. Further still to the south east is the Poike point, the most dangerous point on the whole island. High cliffs, huge waves and strong ocean currents make this a place local fishermen and ocean goers treat with respect. 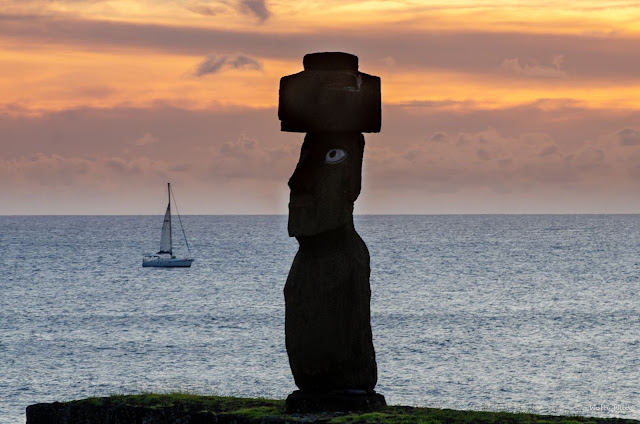 Today I choose the footpath of the secret caves, known as Ana Kakenga which lie half way along the west coast. As the dawn unfolds in glorious cotton wool colours, each minute unwrapping itself to reveal a startling sunrise. The scene is complete with black storm clouds and a tropical rainbow. The summit of Maunga Trevaka slumbers in a cloak of thick cloud. I love the myriad micro climates that all co-exist at the same time on the island. The path winds along a low cliff infused with the smells of the ocean waves below. I see puddles in amongst the lava strewn pathway which tell the story of a rain shower that preceded my passing.

I wonder how Konui would run this trail. Konui is the island’s greatest athlete. In the tradition of the Rapa Nui he runs, swims, climbs, dives and paddles his outrigger canoe except he does it better and with more humility than anyone else. He is a descendent of the Bird man athletes of old who competed annually in the ‘Kavi-Kavi’, a test of courage and skill designed to avoid warfare and settle leadership for the ancient clans. In this event the best athletes from each clan on the island would race down a 500m cliff, paddle across a ferocious current to a small offshore island. There they would seek out the nest of the Manutara bird and steal one of the eggs. The first man back to the sacred village at Orongo on the top of those giant cliffs with his egg intact was declared the winner and secured the leadership for his tribe for the following year.

“Heee-hooo… Go, go go!” Chanted Konui in his wonderfully warm and friendly voice as he showed me an opening in a reef pass several days before.

To say I’d been bowled over by the warm hospitality of the Rapa Nui residents was an understatement. As I ran the ancient trail my thoughts wandered to how closely to nature the Rapa Nui live. Their island bears them the most beautiful fresh fruit and vegetables and the ocean provides them with a bountiful supply of seafood. They have a very strong spiritual connection to the island and the ocean around it. They share both their spiritual awareness and the bounty of their island paradise with a love that is difficult to describe. I found myself profoundly affected by the people and customs of Rapa Nui.

As I felt the salt spray settling on my skin and the sun’s first touches of warmth on my face I experienced that feeling we humans sometimes get when moving through the landscape, powered by our own means, alone with our thoughts and connected to nature. In a word, freedom! 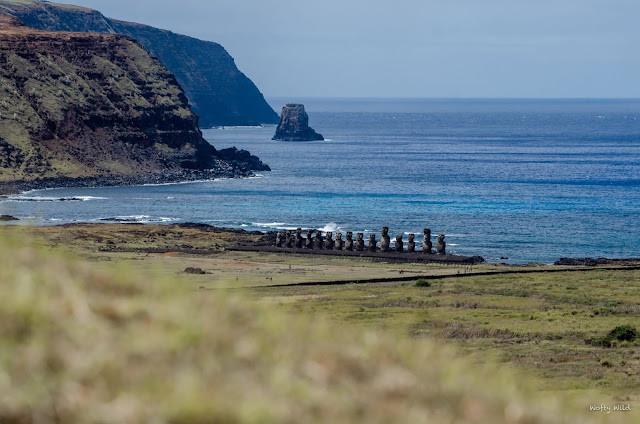 In my case perhaps enhanced by the fact I’d chosen to bring no conventional running shoes to Rapa Nui. Instead I decided to experiment with a recommendation from a friend, the Yeti from t-rockets, more a ‘Jesus sandal’ than a shoe. My children tagged me in ‘Kook of the day’ on Instagram when I first wore it, and my running friends laughed openly in my face when I arrived to join them for a trail on Table Mountain in South Africa. It was me who had the last laugh on Rapa Nui though. The lava rock is merciless. There is absolutely no way you can move swiftly over the terrain barefoot. The T Rocket let me feel the terrain but protected my feet from being butchered. I was free to run as far or as fast as I liked but I still felt connected to the land while I did so. 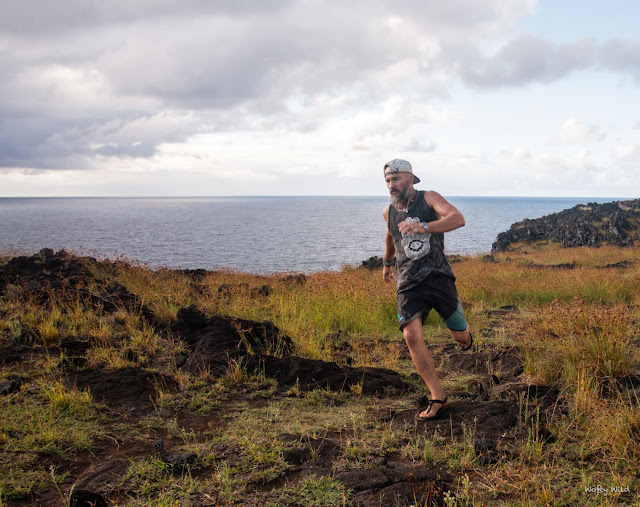 This run would be my last on the island after an incredible two week stay. During this time, I’d sensed a spiritual dawning taking place inside of me every bit as spectacular and beautiful as a Rapa Nui sunrise. As I turned to run back downhill towards the pretty little port town of Hanga Roa, my stride lengthened and I ran with confidence down a trail I knew well. The landscape blurred around me as my speed increased and I reveled in the joy of simple movement.

Doing anything you love in an exotic location is a wonderful adventure and food for the soul. Sharing those adventures with old friends and new builds special bonds between you that can transcend age, gender and even language constraints.

As I re-entered the little town, I slowed my pace to accommodate the bustling pedestrian traffic. With the sun truly up it wasn’t just the construction gangs and the bakery that were up. Everywhere people went about their business in the time-honored way of island life. A friendly toot, a wave, no rush. The women all wearing beautiful flowers in their hair. 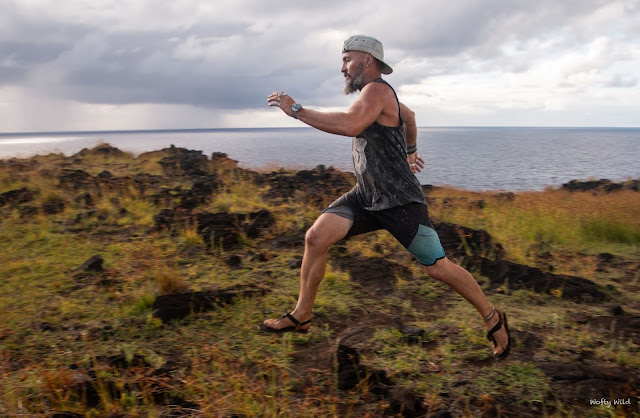 As I turned my final corner and hit the rutted path to where I was staying I pondered just how valuable this time on Rapa Nui had been for me. You can’t grow unless you step out of your comfort zone. I realized just how much coasting I’d been doing until this trip. I’d had my eyes opened by my friend who had just swam 40 miles non-stop around the island in nineteen hours, becoming the first person ever to do so, but that’s another story entirely…

In the meantime, I resolved to dig a little deeper and reach a little higher with my own endeavors and run free every chance I got.

For an account of Sarah Ferguson’s successful circumnavigation swim of Rapa Nui you can find it here: https://plasticoceans.org/swimming-rapa-nui/?fbclid=IwAR2qj8SND1_L-Hh_Bdj5yqt0xTiEhUnWecscyfg9dc53fea7ZiUZGtfZh0s 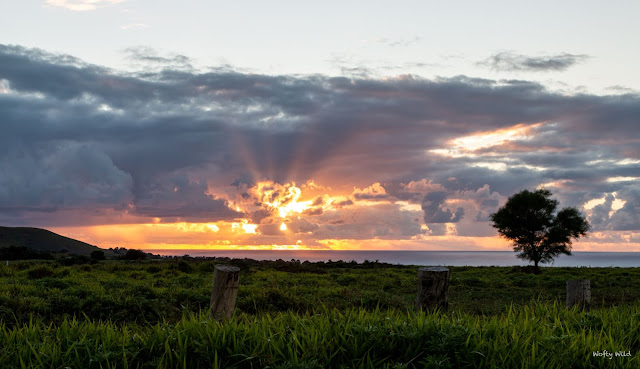 Posted by Andrew Barnes at 04:35 No comments: